To say that I love face oils is like saying The Great British Bake Off will no longer be the same, sweater weather is the best kind of weather or that twinning is winning (sweater weather twinning…. now there’s a thing...) …. it is, quite simply, stating the obvious. So when a while ago my stash dwindled to a mere single bottle, I rightfully panicked, sprung into action and immediately replenished my stash by going bringingback an old favourite and trying out a new kid on the block. 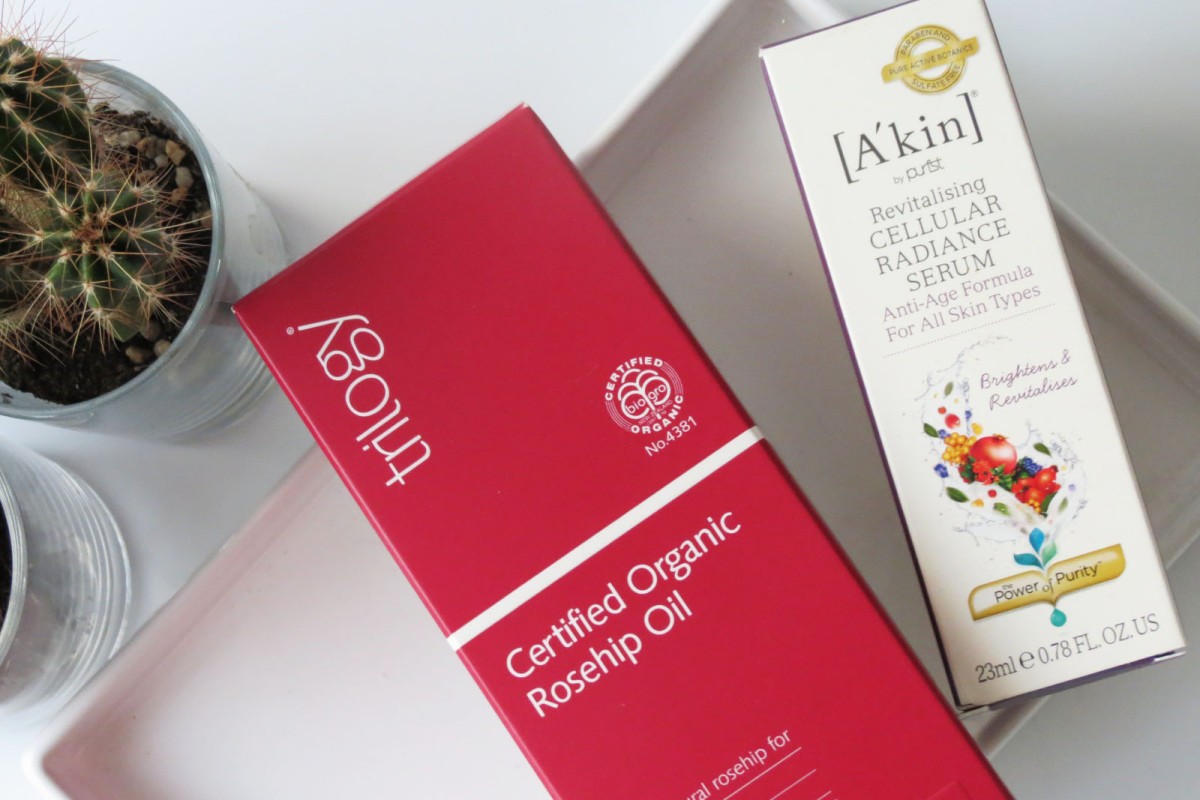 Old favourite: Trilogy Rosehip Oil. What can I say about this that hasn’t been said before? This king amonst kings has been one of the first facial oils to amass critical acclaim and popular recognition, this one and the Pai Rosehip oil are the ones I always go back. I may stray, but I keep coming back, thanks to the hydrating, radiance boosting and anti-ageing effect it has on my Sahara-like skin. 100 % natural, so no nasties that might clogg up or irritate my skin, and mostly effective at night, so I apply 3 – 4 drops at night underneath my nighttime moisturizer or underneath a hydrating mask for an extra bit of oomph.

New kid: A’Kin Cellular Radiance Serum. Or as I’d like to call it ‘Proof that great skincare does not have to cost you and arm and a leg‘. Or, alternatively, ‘Proof that Australia does some kick-ass skincare!‘ But now I digress….
Having never heard of this brand, I got intrigued whilst procrastination enormous amounts of time on one of my favourite webshops, and it was the title of the product that reeled me in. A serum encapsulated in an oil, with cellular boosting porperties? I needed to test that, no doubt about it! A glance at the ingredient list showed me not only that it is an entirely vegan product with nothing but certified organic ingredients, it also made me realise that this would be a great product for lacklustre, tired or more mature skin. Speaking of ingredients, let’s have a look at those first, shall we? Besides rosa canina oil, the mention of Echium oil certainly pleased me as it is full of fatty acids, aka wonder workers.  The rest of the blend is made up by other C02 extracted organic oils such as sea buckthorn, pomegranate, calendula and chamomile, noted for their restoring and anti-inflammatory powers, making this equally suited for sensitive skin.

Long story short, this face oil got me through summer! It perked me up those mornings after a rough set of nights by evening out the red blotches and working it’s glow restoring magic, it soothed my skin after a particular bad sunburn, plus it worked perfectly as a single layer of hydration when all other creams failed to do so . *one layer is not enough, two layers is too much, ooooh the nightmare!* Another thing that set the A’Kin Cellular Radiance Serum apart from others I’ve tested is that sinks in remarkably quickly, without leaving a trace of greasy residue. I’ve got dry skin, so that might have something to do with it as well, but if your skin is a bit more on the oily scheme of things, I would not skip this, I would just adjust the amount used to a drop of two, and then lightly pat in onto your skin. The scent, as is often with organic skincare, is very herbal and earthy, but not too overpowering. A definite re-purchase!

This site uses Akismet to reduce spam. Learn how your comment data is processed.